…but at the end of the day the score is one all for all debating teams.

Should passenger cars be banned from city centres? It seems as if the executive board members of major car companies should start recruiting their future lobbyists among our debaters!

Despite all the media attention about cars contributing heavily to climate change, polluting the air and thus reducing life expectancy among the residents and not to forget the wishful thinking of inner-city green oases for mental recreation – our debaters managed to convincingly argue for the status quo of granting passenger cars access to city centres.

Cynicism aside, the main areas of contention, feasibility, and the prospect of a much quicker process of replacing motor cars by electric vehicles won the debate in terms of content. It certainly came in handy that we had successfully defended electric cars as sustainable last year – funnily enough equally in round 1.

But it was not only content that won the debate, but also the promising performance as far as style and strategy were concerned. Two categories which count heavily within the strict debating format. (For details check our homepage – or join us Wednesdays, 6th and 7th period!)

This house believes that foreign citizens with a residence permit should be allowed to vote in all elections.

This time we had to propose the motion and for a long time it looked as if the debate ran in our favour. Unfortunately though, due to technicalities the tight debate was given to team opposition. Certainly an educational experience for our rookie debaters who had put in a lot of effort into preparing for their speeches at home as well as in extra tutorials at school. They were poised and ready to make their first appearance on the debating scene and they left their mark:

Here’s a team that should be reckoned with!

Tired but happy we closed the debating venue in the evening, looking forward to rounds 3 and 4 in February.

A special thanks to the Verein der Ehemaligen und Freunde for supporting our membership in the Debating Society Germany!

Interested? Join us Wednesdays 6th and 7th period in A15 (E Phase upwards)! 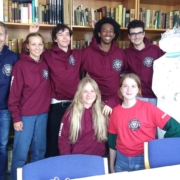 NO to arbitrary! Debating team finishes South League with a final win